A visionary entrepreneur, Ms. Sminu Jindal is the first lady entrant in India to do her gender proud by breaking the glass ceiling in the Steel, Oil and Gas sector. As the Managing Director of Jindal SAW Ltd, she belongs to the USD 18.5 billion O.P. Jindal Group. 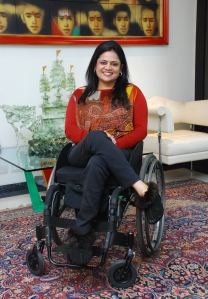 “There is a widespread lack of awareness about accessibility which benefits all” – Ms. Sminu Jindal, MD, Jindal SAW Ltd. & Founder-Chairperson, Svayam

Jindal SAW among other things was the first to manufacture Submerged Arc Welded (SAW) Pipes using the internationally acclaimed U-O-E technology in India. With her crisp business acumen and foresight, Ms. Jindal led the company to a commanding position in India’s tubular market, being the undisputed leader. In the recent years, proliferation in various industry verticals has further strengthened the position of the company, as her extraordinary business vision and foresight helped it to spread its dynamic presence worldwide.

With manifold growth, innovation and continuously setting new benchmarks, Jindal SAW Limited, under the able leadership of Ms. Jindal, has marched ahead to other businesses through its subsidiaries.

Under her stewardship, Jindal SAW’s subsidiary JITF is laying a strong foundation for a secure and sustainable future. The subsidiary is running India’s leading and most efficient Waste-to-Energy (WtE) plant in Delhi, generating 21 MW energy having consumed 4 MMT of municipal waste in the last six years alone. Also, it has additionally been awarded eight waste management projects in different parts of India, including Andhra Pradesh (3), Punjab (1), Rajasthan (2), Gujarat (1) and Delhi (1) which are under different stages of construction.

Ms. Jindal also leads another robust nation-building vertical, the Jindal Rail Infrastructure, which manufactures rail wagons at the plant located in the Indian state of Gujarat. The plant is one of the largest suppliers for all types of Broad Gauge Freight Cars to Indian Railways and Private Sector; the only Freight Car manufacturer in India to have successfully developed and manufactured Special-Purpose Freight Cars for transportation of 260 meters long welded rail panels in 5 tiers, also successfully designed and developed Freight Cars suitable for tippling operation using a combination of rotary and fixed couplers – Gondola Cars for Export Market (Cape Gauge, Africa).

As Ms. Sminu Jindal has made a historic and exemplary contribution in the Indian steel industry, she continues to be the Chairperson of the ASSOCHAM National Council on Iron & Steel since the year 2007.

An alumnus of Shri Ram College of Commerce, New Delhi, Ms. Jindal went on to pursue her MBA from the Fore School of Management, New Delhi, with specialization in Finance. Her outstanding academic performance won her a Silver Medal. The Institute of Marketing and Management, New Delhi bestowed upon her the award of excellence as the ‘Top Woman Entrepreneur’.

Creating a livable world for all:

A capitalist with a socialist heart and an indefatigable accessibility crusader, Ms. Jindal had met with a car accident at the age of eleven that changed her whole perception toward the world. She believes in empowering people by giving them an opportunity through accessible infrastructure to lead dignified lives. She is a strong believer that every human being has inherent capability to contribute both – creatively and economically to the world around itself.  With this belief, she founded Svayam which has been constantly working towards dignity for people with reduced mobility. She focuses on accessibility of built infrastructure and transportation systems.

Founded in 2000, Svayam started as a platform that provided crucial and helpful information related to government schemes, details of NGOs/organizations, rehabilitation departments, and legal information about rights and accessibility in built environment, etc. Svayam helped persons with disabilities to come out and avail of these services/schemes, etc.

Visualizing that it’s only through the collaborative efforts of the Government and the stakeholders, the realm of public infrastructure could be made inclusive, barrier-free and welcoming to all irrespective of their abilities, age and gender, Svayam began advocating, handholding and facilitating creation of liveable, inclusive and barrier-free communities with various civic and government agencies.

Svayam works with policy makers and other stakeholders helping them change their perception that accessibility is not only required by persons with disabilities but benefits everyone which may include pregnant women, children, people with temporary disabilities, victims of terrorism, war veterans, the elderly, etc.

Svayam, is today, India’s leading accessibility organisation. It has brought about profound and fundamental change in the mind-set of society about the abilities and economic contribution of the most disadvantaged segments such as persons with multiple disabilities in the nation’s growth.

Ms. Jindal’s entrepreneurial zeal and achievement as a celebrated businesswoman has given her much needed wherewithal to make a difference in the lives of the people with reduced mobility, and put smiles on umpteen, unknown faces and build an inclusive society. Her relentless pursuit of achieving the shared dream of an accessible world continues unabated and has turned Svayam in to a movement.

Due to her leadership and involvement in empowering others through her initiative Svayam, Ms. Jindal was handpicked and invited to chair ARUNIM. As the Chairperson of ARUNIM, she had contributed tremendously taking the annual turnover of the body from a meagre Rs. 3 lakh in the first year to Rs. 1 crore in a small span of time before she moved on to focus on accessibility. Under her chairpersonship, the ARUNIM won the prestigious ‘Zero Project Award’ for its contribution in economic empowerment of persons with disabilities. She also along with Dr. APJ Abdul Kalam, the then Hon’ble President of India, launched the E3 Challenge which stood for Economic, Enterprise and Empowerment. This challenge further established success of people with multiple disabilities when given accessible environments. They not only generated self-employment but also created employment for others.

Ms. Jindal and her initiative Svayam have won numerous awards and laurels in India and abroad and was featured in many renowned publications including “Corporative Divas” – by Sonia Golani, “Why I Failed” – by Shweta Punj (Penguin), “Indian Business through the Ages” by FICCI on 50 years of Celebrations of India’s Independence.

Some other awards are: